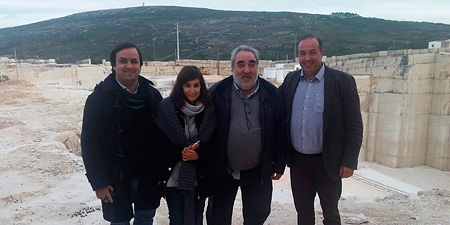 SOLANCIS donated the stone for a sculpture which will feature in a showcase of Iberian creativity in Washington, USA

Azul Mónica was the stone chosen by the architects Eduardo Souto Moura and Álvaro Siza Vieira to create the piece “The Stone Raft (Jangada de Pedra)” which will feature in a showcase of contemporary Iberian creativity in Washington throughout March.

“The Stone Raft”, inspired by José Saramago’s book of the same name, will be on exhibition in front of the John F. Kennedy Center for the Performing Arts, America’s national cultural centre, from the 3rd to the 24th of March.

The piece, and the invitation extended to Eduardo Souto Moura, who later invited Álvaro Siza Vieira to collaborate, was an initiative of the Arte Institute which coordinates the promotion of Portuguese culture in New York.

Other works will also be on show, amongst which a life size tram made out of cork created by artist and designer, Nuno Vasa, which conveys the “Message” by Fernando Pessoa.